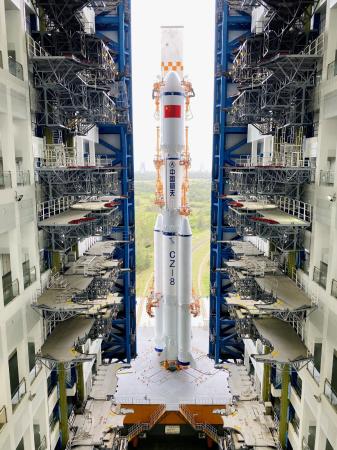 The Long March 8 rocket waits for its debut flight. （Photo provided to chinadaily.com.cn）

The 50.3-meter rocket ignited its engines at 12:37 pm at a coastal launch pad, thundering skyward into thick layers of cloud.

After about 15 minutes, the rocket reached a sun-synchronous orbit with an altitude of 512 kilometers, and then deployed the New Technology Demonstrator 7 experimental satellite and four small private satellites.

The mission marked the 356th flight of the Long March rocket family, the pillar of China's space transport system.

The rocket's service will also give a strong boost to the development and deployment of satellites operating in low- and medium-altitude orbits, he said.

Designed and built by the China Academy of Launch Vehicle Technology, a subsidiary of China Aerospace Science and Technology Corp, the Long March 8 has two core stages and two side boosters. It has six engines propelled by liquid oxygen, liquid hydrogen and kerosene.

With a liftoff weight of 356 metric tons, it is capable of sending payloads weighing 4.5 tons to a sun-synchronous orbit 700 km above the ground or satellites with a combined weight of 2.8 tons to a geostationary transfer orbit, according to the academy.

The Long March 8 is capable of transporting various spacecraft to multiple types of orbits ranging from low-Earth orbit to transfer trajectories to other celestial bodies in the solar system. However, its main task is to place satellites in a sun-synchronous orbit to meet surging demand for launch services from commercial satellite companies at home and abroad, according to designers.

In China and many Western nations, an increasing number of newly founded private companies have started to design and build satellites, generating huge demand for commercial launch services. Many of these privately made satellites are set to operate in a sun-synchronous orbit.

In addition to the Wenchang launch facility, the rocket can also be fired at the Jiuquan Satellite Launch Center in the northwestern Gobi Desert.

Research and development started in 2017 and took about three years. Construction of the first Long March 8 finished in October.

In addition, its high transport efficiency will be attractive to clients, he said.

Project managers have estimated that at least 10 Long March 8s will be used each year given the robust requirements from domestic and international satellite businesses, while their annual manufacturing capacity will soon reach 20.

In the long run, the rocket is expected to become the first reusable model in the Long March series as designers have planned to give it reusability to increase its commercial competitiveness.

Designers intend to develop an integrated first stage for the rocket's future reusable variant. This new first stage will consist of a core booster and two side boosters. Instead of breaking up and falling back to Earth like all existing Chinese rockets' first stages do, the new core and side boosters will stick together and conduct propelled landing as a whole onto a recovery platform at sea.

The most renowned reusable rocket in the world is SpaceX's Falcon Heavy, which made its maiden launch in February 2018. All boosters on the American rocket's first stage can be recovered and reused as they will separate from each other and perform controlled re-entry and landing.

During the past six years, China has made tremendous strides in its rocket industry. In the Long March family alone, six new-generation models were put into service over this period, ranging from the comparatively small, solid-propellant Long March 11 to one of the world's mightiest types – the Long March 5.

Furthermore, several private enterprises have attempted to develop and operate their own carrier rockets and two of them – i-Space and Galactic Energy – have succeeded and used their rockets to fulfill orbital launches.